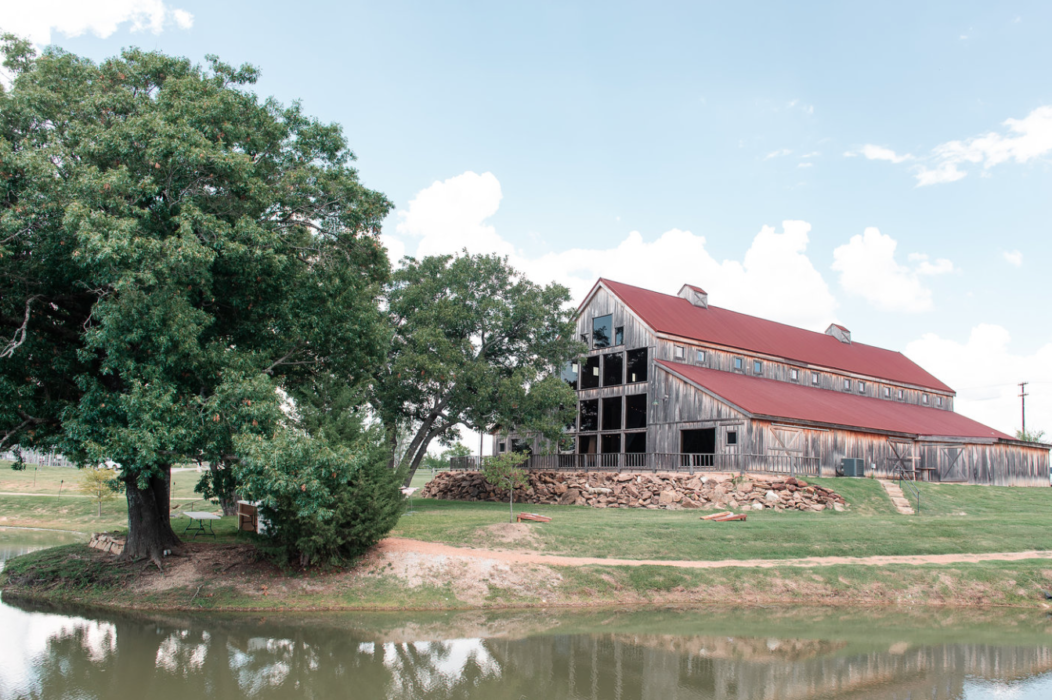 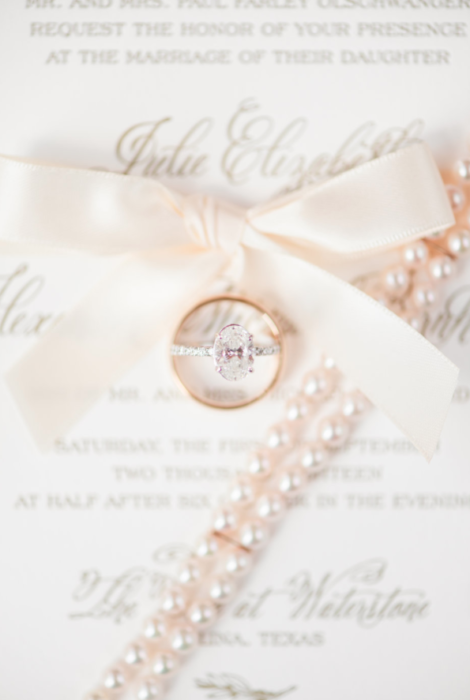 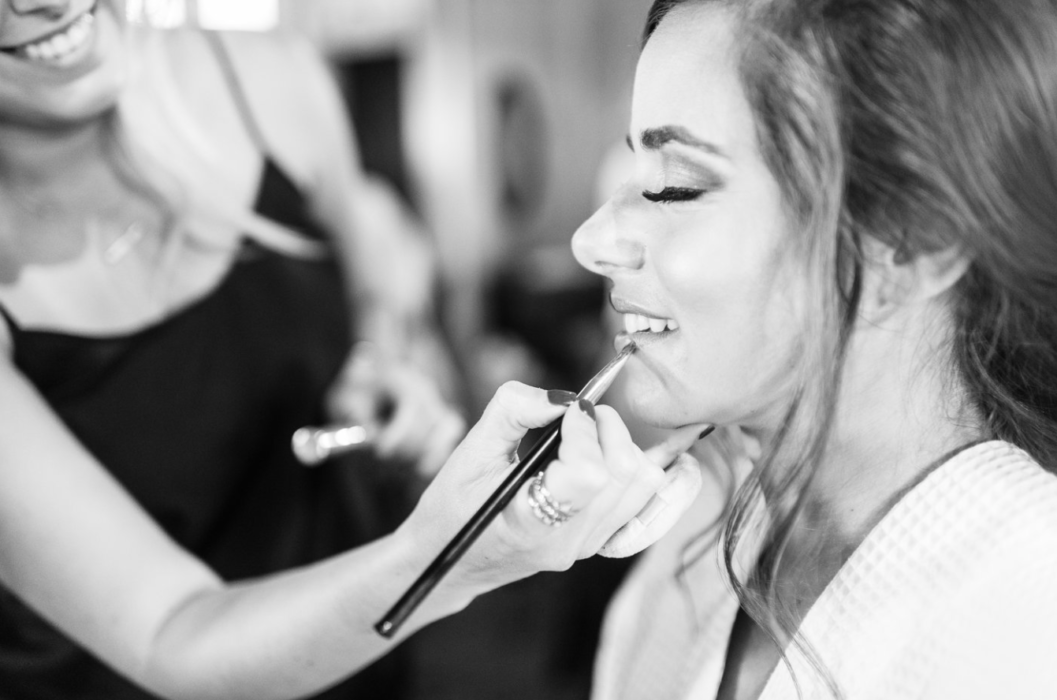 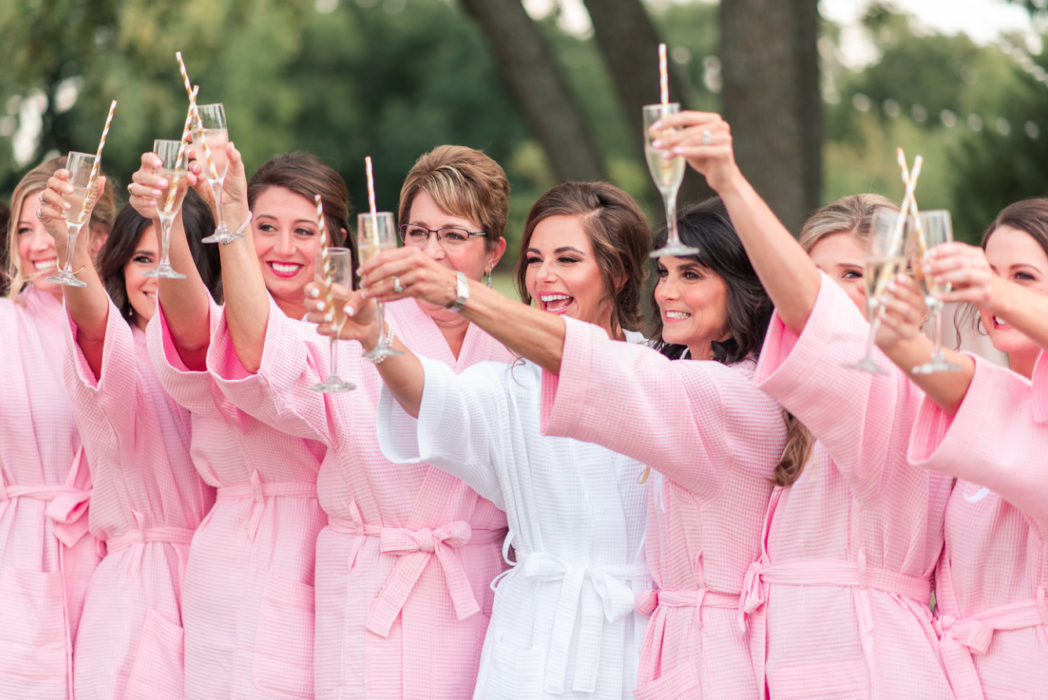 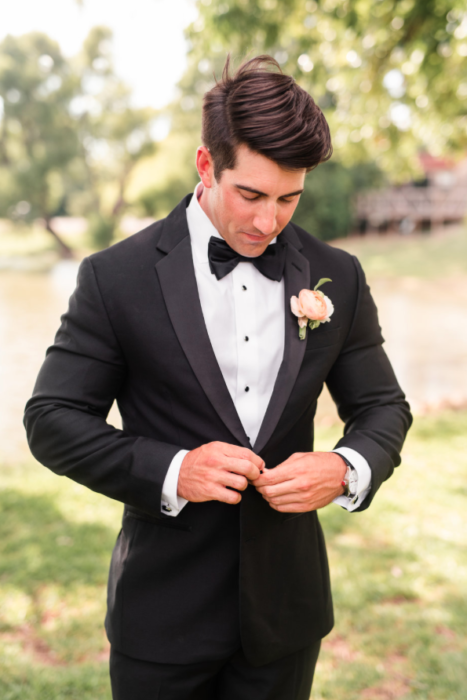 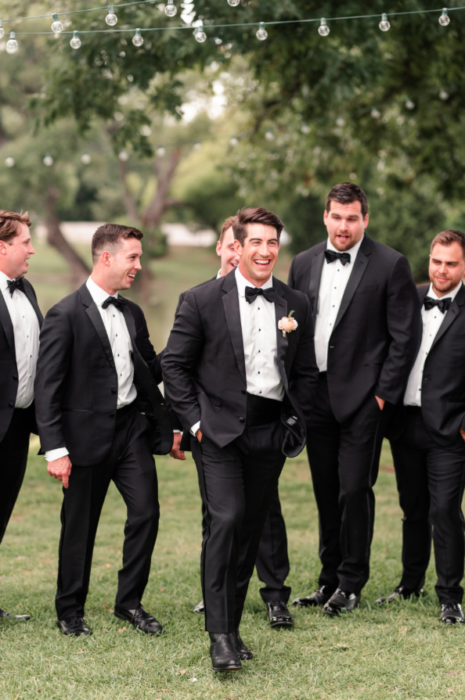 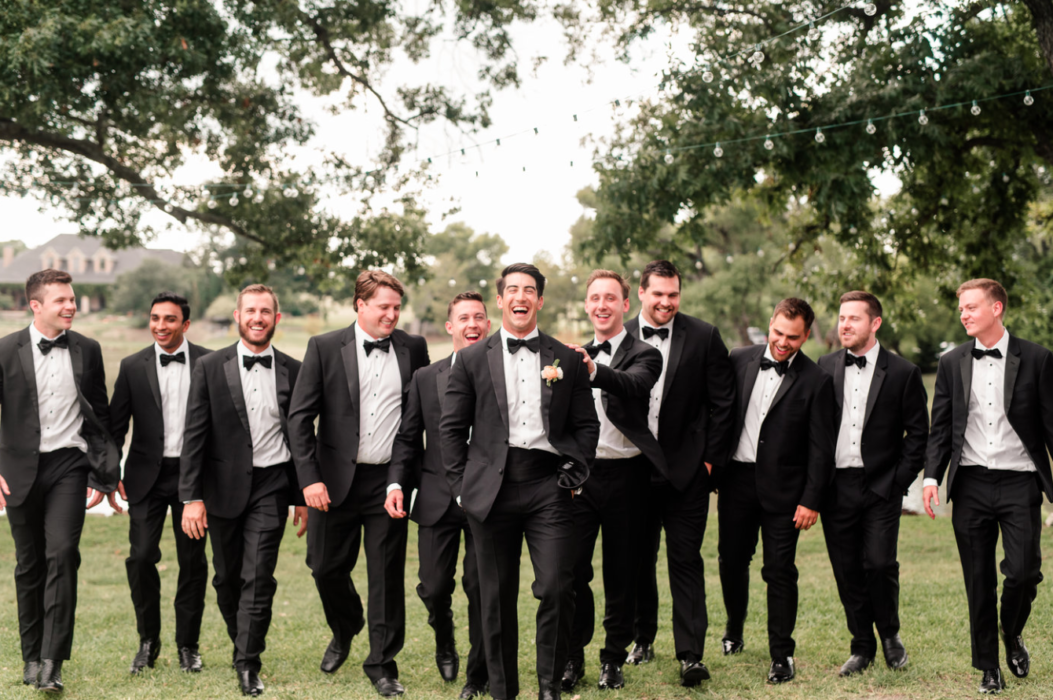 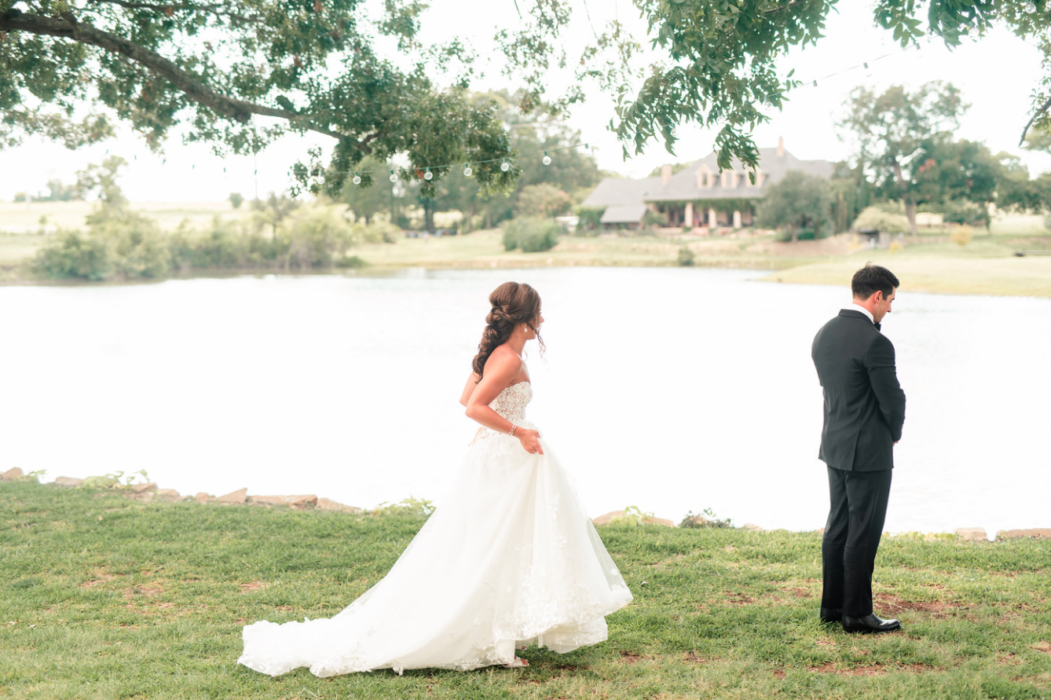 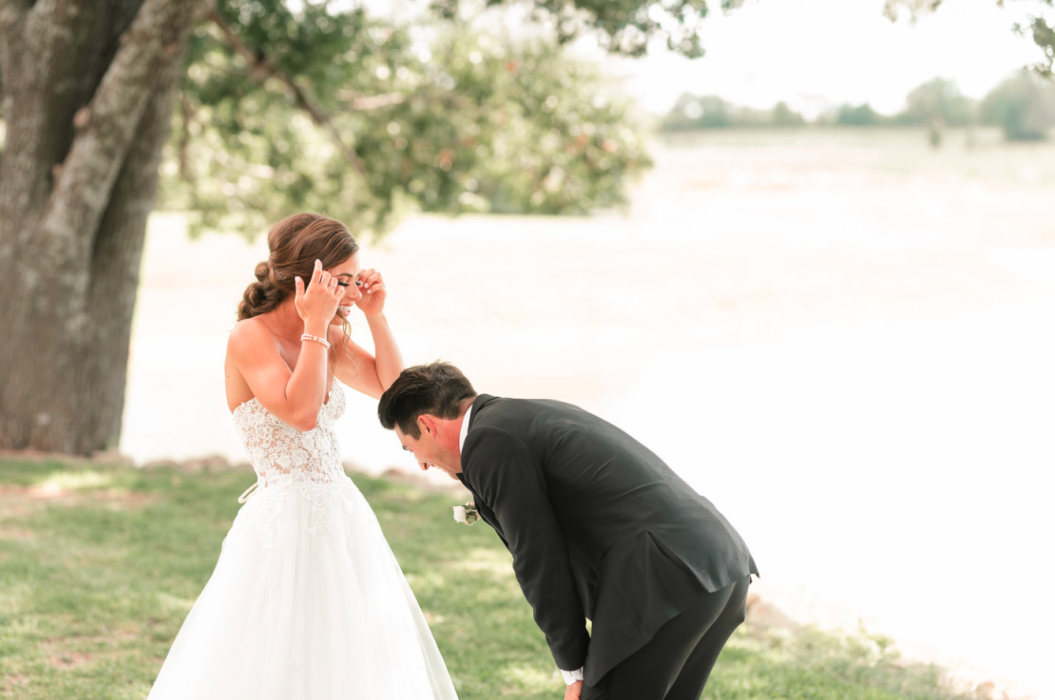 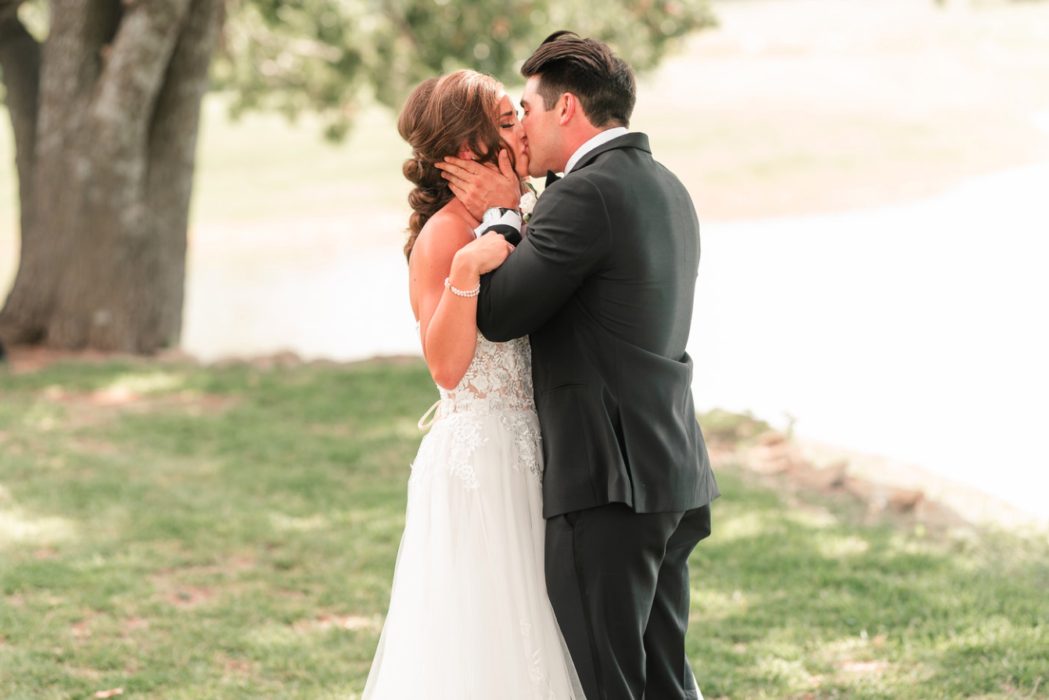 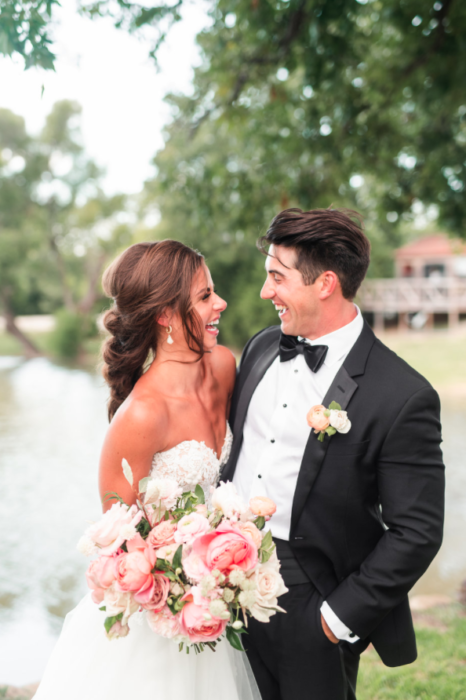 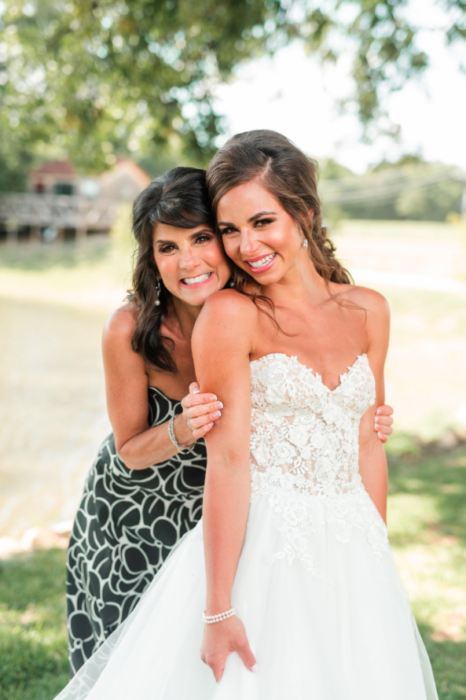 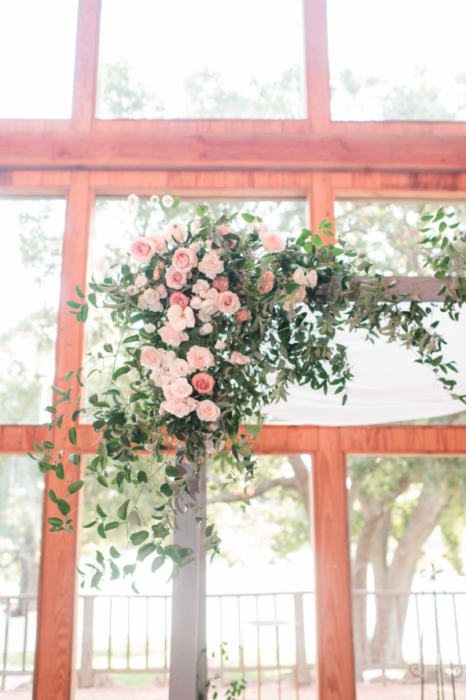 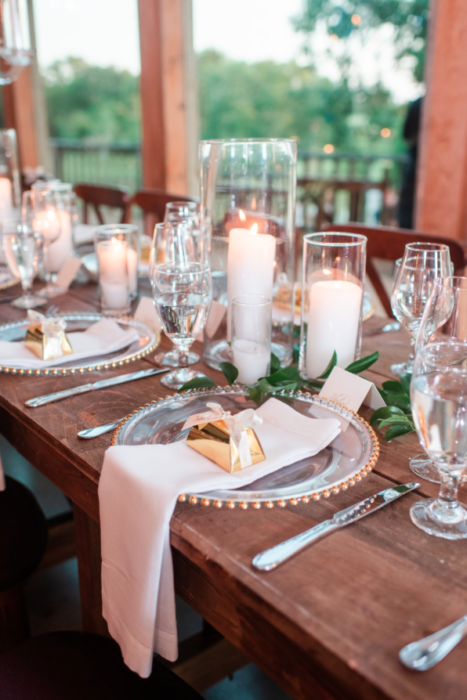 Once upon a time Julie Olschwanger’s roommate, Lindsay, was dating a boy named Andrew, and Andrew lived with a boy named Alex Bernhard. Lindsay and Andrew set up Julie and Alex on a date, and both couples lived happily ever after. (We skipped a few details, but that’s pretty much how the story goes.)

“[Andrew] told me [that Alex and I] would ‘fall in love and get married,’ and I thought, ‘Yeah, I am sure,’ ” Julie says. “Andrew used to call Alex while he was at our apartment and tell Alex, ‘I’m with your future wife.’ ”

After a love-at-first-sight type of meet-cute—and true to Andrew’s predictions—Alex and Julie became inseparable, despite the fact Alex was living in Midland. Each weekend, he would travel nearly five hours to see Julie—and three years later, he proposed while they were at Austin City Limits Music Festival. Although they didn’t know each other during college, they both graduated from the University of Texas at Austin, in 2014, so Alex took Julie on a walk through campus and got down on one knee as they approached the iconic UT Tower.

Once he put a ring on it, Julie turned childhood reveries into a reality. “Ever since I was a little girl, I dreamt of getting married in a big, princess white dress with cowboy boots in a romantic, rustic barn,” Julie says, which led her to the Venue at Waterstone. “Two weeks after the proposal, we immediately looked for a venue, and as soon as my mom showed me this barn, I knew it was perfect. It had so much charm and character and an elegance to it, not to mention the gorgeous lake and luscious trees in the background.”

Julie’s Jewish faith also guided several of the decisions: As the first Jewish wedding at the Venue at Waterstone, their rabbi officiated the ceremony on September 1, 2018, under a chuppah adorned with greenery and roses. “Alex smashed the glass and kissed me, it was truly the best moment of my life as everyone yelled ‘mazel tov,’” Julie says.

Once officially hitched, Julie and Alex took some time in the surrounding nature and ate dinner alone in the groom’s house during cocktail hour, where he surprised her with a second wedding band—and then it was time for another band to have its moment.

With country hits set as the soundtrack for the night, Icehouse Band took the stage. “Wanted” by Hunter Hayes kicked off the evening for the first dance, then Julie and her dad danced to Heartland’s “I Loved Her First,” which was just a foreshadowing for his toast where he recited the lyrics from “My Little Girl,” by Tim McGraw. “My parents made everything so special between my dad specifically wanting to pick out every song the band played to my mom making 230 homemade individual favors at each table,” Julie says. “Our vendors also made it so special. We know they do weddings every single weekend, but they made us feel like we were their only client.”

Everything before this day is just water under the bridge 💏 Julie and Alex wed on September 1, 2018, inside The Venue at Waterstone. Although they had a roof over their head as they said “I do,” the surrounding property created a lush backdrop for photos before and after the nuptials. ⠀ ⠀ This photo came right after they officially became man and wife. “This moment for us was definitely when we took it all in: this special love for each other, all of our amazing friends and family from near and far that came to celebrate with us, every moment leading up to this day, and the realization that we get to spend the rest of our lives together,” Julie says. “It was so special and surreal, and one year later, I love him even more than the day we took this.”⠀ ⠀ Although your day is sure to be a whirlwind, don’t forget to pause with your person for a moment alone—you’ll be glad a year later to have those quiet memories away from the happy chaos. 💗 Thank you @dweddings partner: Venue @waterstonevenue #DWeddings #dallasweddings

"Our vendors also made it so special. We know they do weddings every single weekend, but they made us feel like we were their only client.”